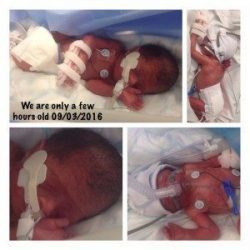 Last year was my first experience of World Prematurity Day – a time I was in the middle of Cognitive Behavioural Therapy for the symptoms of extreme postnatal depression (PND) and post-traumatic stress disorder (PTSD).

My heroes are my twin boys!

This year is different. The true heroes are my twin boys, they have come the furthest and made the most incredible journey that I defy anyone not to be inspired.

Born at 29 weeks, at just 2lb 3 and 2lb 5 birth weights, my boys had been through more in their first weeks of life than most do in a lifetime.

After they were born so suddenly and early, I worked on adrenaline, staying at the hospital as often as I could, expressing, just hoping we would get out and start a ‘normal’ life as soon as we could.

All I could do was get involved as and when possible – beg for as much kangaroo care as often as possible, I held them together first three weeks after they were born as a birthday present.

I didn’t really feel like a mummy; my boys were in the hands of the professionals. I had to see as they resuscitated Joel, hold back as they assessed Ollie for Sepsis, pray blood transfusions, head scans would be normal and hope they could breathe on their own as quickly as possible.

Two months after their birth, we were ‘allowed’ home. But it’s really where the PND and PTSD set in as I tried to process what had happened. I self medicated to block out the guilt that was consuming me on my failure to carry my twins full term.

Whilst I was falling apart inside (and outside on occasion) my husband and family were holding it together.

My boys were being surrounded by physios, consultants, doctors, health carers – all telling me it was going to be ok but I didn’t believe any of them. How was this ok? It wasn’t how it was meant to be.

I joined all the Facebook groups telling me what I should have been aware of when my waters broke at 27 weeks following earlier laser surgery for twin-to-twin transfusion. Maybe I could have held them longer somehow, even with no fluids left and infection factors being so high – I hassled the Obstetrician at why she made the decision for me to deliver so early.

The guilt i faced as a premature mum!

I needed answers, but nothing was taking the guilt away. It was gnawing at me; my anxiety was though the roof, convinced my boys were going to suffer disabilities as a consequence of their prematurity, picking up on any tiny detail.

I grieved the last trimester I never reached; I became angry and withdrew from everyone, especially those who’d had ‘successful’ pregnancies, lost my faith, believed in nothing. I was numb and wanted it to end. I was suicidal.

Perhaps my boys were the reason I didn’t act on this. They needed their mum and I loved them so much and was buying / doing anything I thought may help – desperate to believe nurture could take over where nature failed.

New Years Eve, nine months after my boys were born, I posted the first picture of them on social media. I commented that without them, and my husband, I wouldn’t be here.

I was expecting it to go under the radar. But it seemed practically everyone I had ever known saw it and commented. I was overwhelmed. It was the start of my true recovery.

The future for my gorgeous twins!

Fast forward and my boys are now 20 months. They are social, healthy, happy beautiful (and cheeky!) boys – walking, ‘talking’ and well within the height / weight ratios for their actual age. And I have thousands of photos and videos denoting their progress. 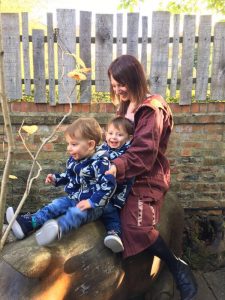 A year on the twins having fun!

I face World Prematurity Day 2017, able to deal with the premature experience, to talk about how it rocked me to my absolute core and change me completely. Just maybe I can now also dare look forward and believe it will be ok.

Sometimes it takes a good fall to really know where you stand. I am so proud of my boys and their strength and choice to face and live every day so happy. Others say the same of me too, that I am strong, but I know in myself I am still fragile and have a long way to go.

Still together, we have come a long way.

A guest post written with honesty and courage for #worldprematurityday2017