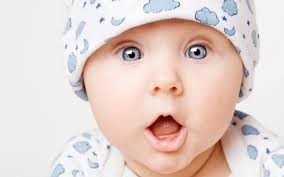 Facial expressions don’t just tell us how a person feels; they indicate what someone is about to do and how they expect you to respond. An angry glare from a parent tells children to stop squabbling. A smile shows a child happiness, everything is ok. In any face-to-face conversation we watch every movement of a muscle in the other person’s face without even thinking about it. Did you know even a two-week old baby can distinguish between facial expressions of sadness, happiness and surprise! It was in the 1970’s that the study of babies emotions began in earnest; and we have come to realise what a vital tool they are to achieving a greater understanding of ourselves and other people.

How useful are emotions?

By examining emotions more carefully, using the latest research from neuroscience and psychology, it becomes clear that each emotion is both wiser and more useful than we might think. Emotions provide us with a ready-made way of responding to a situation without having to work out from scratch what we should do. This is why emotions can appear to effect us so quickly: when we suddenly burst into tears, or find ourselves losing our temper uncontrollably. Funny I always put this down to PMT!! But every emotion has its purpose, even the negative ones. It is easy to see why fear keeps us safe by alerting us to danger and readying the body for fight or flight. Likewise disgust induces us to recoil at the sight of faeces or vomit, thus protecting us from disease. The usefulness of emotions such as sadness and anger, though, is harder to appreciate. In fact sadness, like every emotion, gives us information. If we didn’t feel sad when a relationship or a job was proving fruitless, why would we ever seek to change anything? And in the right place, at the right time, anger can be essential.  The social psychology of the developing child has been much studied over the past 40 years and two examples of the most enduring studies can help parents to understand how their own emotional behaviour and facial expression can influence the confidence and emotional well being of their young child.

In 1975, Edward Tronick and colleagues first presented the “still face experiment”. He described a phenomenon in which an infant, after three minutes of “interaction” with a non-responsive expressionless mother, “rapidly sobers and grows wary. He makes repeated attempts to get the interaction into its usual reciprocal pattern. When these attempts fail, the infant withdraws [and] orients his face and body away from his mother with a withdrawn, hopeless facial expression.” It remains one of the most replicated findings in developmental psychology.

Why has this experiment, first published in the mid-1970s, become so important?

The still face experiment demonstrated that very young infants already have several basic building blocks of social cognition in place. It suggested that they have some sense of the relationship between facial expression and emotion, that they have some primitive social understanding, and that they are able to regulate their own affect and attention to some extent. The infants’ attempts to re-engage with their caregivers also suggest that they are able to plan and execute simple goal-directed behaviours. 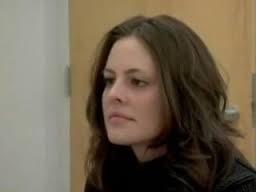 By 1975, researchers had already devised ways to describe and quantify the reciprocal social exchanges that are characteristic of infants and their caregivers. However, the still face experiment allowed researchers to examine the ways in which infants spontaneously initiate social exchanges and the way they modify their affect and attention. Importantly, it is a very easy experiment for researchers and parents to properly execute, which is perhaps why it is so popular. The still face experiment has also proved useful in determining the extent of an infant’s social world. That is, the still face effect is not only elicited by the mother (i.e. the primary caregiver), but also by fathers, strangers, and even by televised images of other adults. However, infants do not respond in similar ways to objects, no matter how interesting, interactive, or dynamic they appear to be. This provides more evidence that young infants readily categorise the world into potential social partners and inanimate objects. Parents once aware of this should focus on how their own responses affect the social cognition of their rapidly developing child and how aware the child is of the social world around them.

For almost forty years, the Infant Studies Lab at the University of California has been studying human development during infancy, under the direction of Joseph J. Campos, PhD.   This lab is perhaps best known for its work on emotional development.  It pioneered in studies of the development of fear, anger, happiness, emotional communication, and social referencing.  Some of its best-known work has used the well-known “Visual Cliff,” an apparatus that gives infants the illusion of approaching a drop-off.  Using tests on the Visual Cliff, the lab has demonstrated that human beings are not born with an innate fear of heights, but rather acquire this fear during pivotal stages in infancy. The lab is also known for using the Visual Cliff to demonstrate the phenomenon of Social Referencing, by showing that infants will sometimes venture into the illusory drop-off, and other times avoid the cliff completely depending upon the emotion being displayed by their mothers.

What is “Social Referencing?”

As a baby develops motor skills of crawling and walking that allow her to move around and explore, she soon begins to look back at her mum to see if it is OK to play with unfamiliar objects or to go around new corners. In child development this behaviour of looking back to a parent to see if something new or unfamiliar is OK is called “social referencing.” Babies and children look to the adults they trust to provide them with clues to safely guide their explorations.  The clues often come from the parent’s non-verbal behaviour, in particular the facial expression. 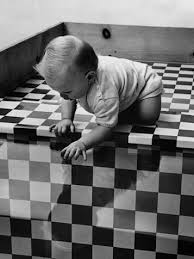 Parenting tips learned from this experiment include being clear to make an encouraging face when you child is trying something new that is positive and safe and making a fear face when the child is considering an action not desired or dangerous. Observe your baby to see when she looks to you as if to ask, “Is this OK?”  Provide clear clues for your baby as she explores the world around her. This gives baby the confidence to explore, play with a new object, by held by an unfamiliar relative visiting from out of town, and more.